Founded in West Kirby in 1983, the Orchestra was originally part of the St Bridget’s Music Society, changing its name to the Wirral Symphony Orchestra in 1995. From 1995 to 2008 the WSO was conducted by Gabrielle Horne. From small beginnings the Orchestra expanded in both size and musical achievement, and by 2005 the WSO had become a large and vibrant musical body, and established itself as an independent organisation in its own right, and as a Registered Charity (No 1112140).

Celebrating its Silver Jubilee in 2008, the Orchestra appointed Jonathan Small*, Principal Oboe of the Royal Liverpool Philharmonic Orchestra*, as its Conductor. Jonathan commenced his third term as Conductor in the 2016-17 Season and celebrated 10 years with the orchestra in the 2018-19 Season.

Wirral Symphony Orchestra’s widening repertoire has included performances of works such as Smetana’s Má Vlast cycle, Mahler’s first three Symphonies, Strauss’ Death and Transfiguration, opera performances including Bizet’s Carmen and Wagner’s Die Walküre, Last Night of the Proms concerts, The Snowman with the film soundtrack performed live by the Orchestra, in addition to well-loved and notable works by Rachmaninov, Bruch and Brahms and numerous others.

The Wirral and Crosby Symphony Orchestra*s combined for the first time in June 2019 to perform the “Alpine Symphony” by Richard Strauss with over 130 instrumental players on the stage of the Liverpool Philharmonic Hall. In 2014, 2016 and 2018 the Orchestra undertook exchange concerts with Ensemble Vocal Renaissance Choir from Le Havre, performing Duruflé’s Requiem, Mahler’s Resurrection Symphony and Haydn’s Creation, in Hoylake, Chester and Normandy.

The Orchestra performs regularly in Hoylake and at the Floral Pavilion, New Brighton; other concerts have been held in Heswall, Wallasey, Ellesmere Port, St Helens, Chester and Liverpool.

A part of our charitable aim is to be of benefit to the local community, and amongst its musical activities, as well as engaging professional soloists, the WSO also continues to seek to encourage and engage local young talent in concert performances.

Vasily Petrenko*, Conductor Laureate of the RLPO, was the Orchestra‘s Honorary President. He said:
“It is a great pleasure to see a large group of musicians not only maintaining traditions of music- making, but being ambitious and working toward their own improvement and progress. This is what I believe is the way to a great future!”
Maestro Petrenko undertook a rehearsal with the Orchestra in 2016, which many members described as “inspirational and helpful”. 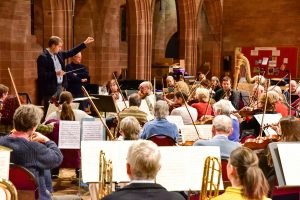 * The Wirral Symphony Orchestra is not responsible for the content of external sites.